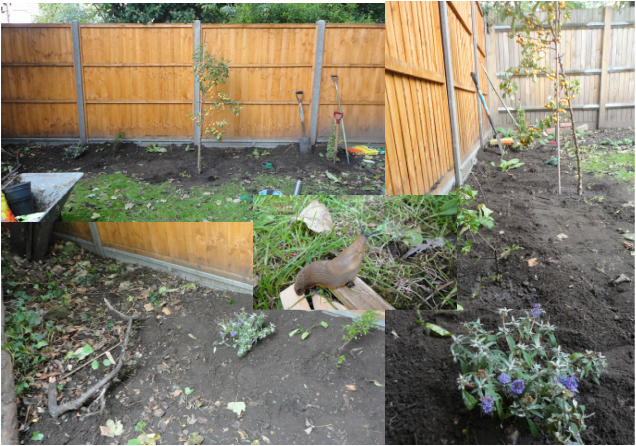 Found : Hazel sapling and relocated remaining pyracantha.
Variety of slugs came out to say hello but not many worms.  Perhaps adding Gro char to  the soil will change that.

Plants and cuttings don't fill the relatively small planting area but have 0.5 m to grow into.  Meanwhile butterfly and hoverfly friendly plants can fill the gaps. 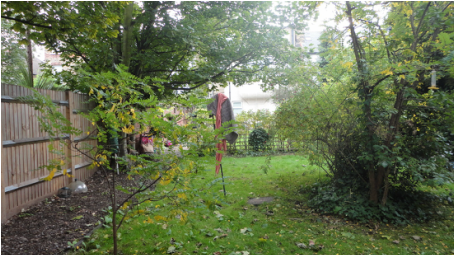 Shade
This is view facing South.  The Sycamore branches (left) and top of Robinia to the right are creating shade.  Wondered whether to prune them both to enable light to reach Crab apple, which it needs.  (Would also make a better view from the house). (Done: See November 2013, May 2014, June 2014 and February 2015 in 7. Implementation)

Action
Agreed with J to look into whether I can prune the lower branches of Sycamore.
according to internet sources :
(﻿http://www.wildaboutbritain.co.uk/forums/trees﻿﻿)
it is possible in late Autumn and is 'tough as old boots' although Robinia should be pruned in Spring.

Updated base  to include plantings 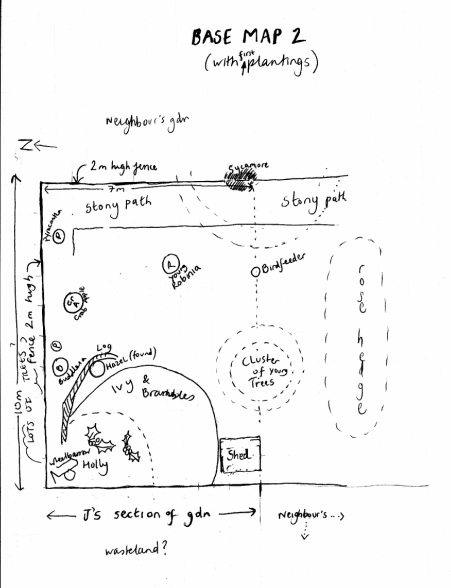 Contingencies,
Next date November....
To prune sycamore with long handled loppers and plant hedge depending on whether any space available/J wants one - poss next to Buddliea

Observations and other info

J had bought 2 more Pyracanthas, different colour berries to add to the hedge
Crab apple was still OK, a bit sunken and losing it's leaves but looking heathly
Most of last month's cuttings still in place and honeysuckle doing especially well
Teasel plants seem to have taken
Lots of leaf fall from Sycamore and rose bushes to use as mulch
Chives growing in clumps in lawn (did I chuck some seeds about last time?) which is good for bees
Sunny November day

Shade cast on South -facing planting area before cutting Sycamore (on East) and after. Further shade cast by Robinia (prune in Spring) and a large ivy-clad tree on West side that birds love (so not going to touch that) 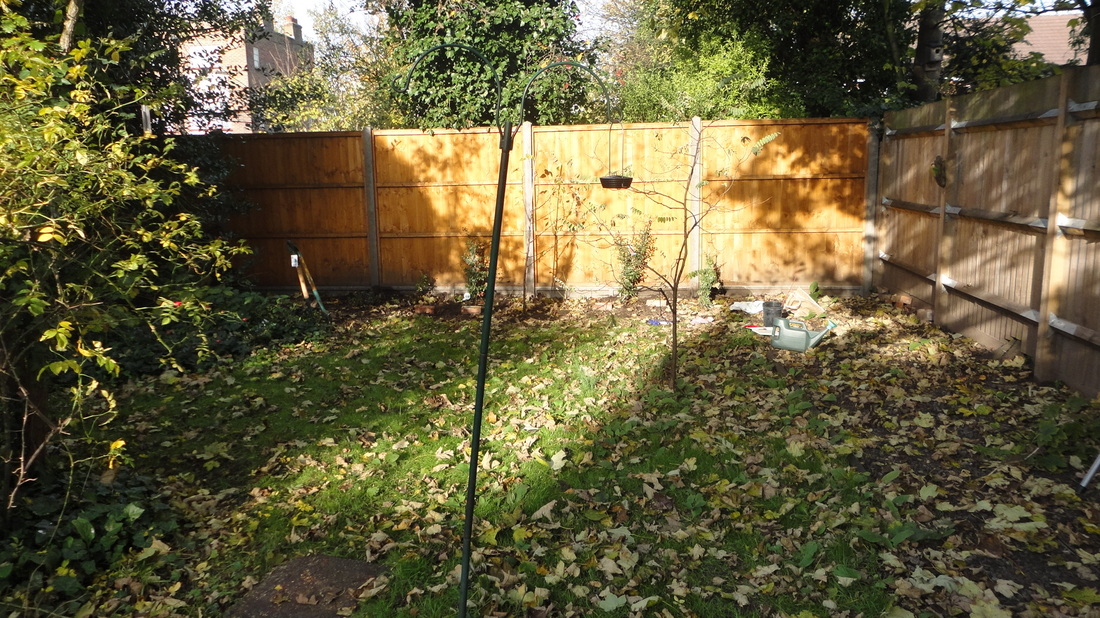 Shade in the afternoon - the ivy clad tree's shadow on the left, though there is definitely more sun on the Crab apple.
Evaluation November 2013
Am hopeful that extra light wil help Crab Apple and hedge establish (see photos)
Advised J Pyracantha might dominate but she is Ok with that
Plantings are close but some can be thinned out later (the ones that didn't cost anything such as dogwood and Willow)

research bird nesting times, tweak implementation
research feasibiility of small pond
draft maintenance schedule
set a date for Feb or March 2014 depending on how warm the spring is! 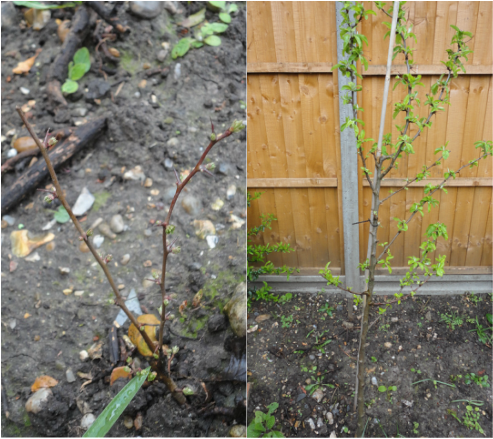 Visited J's garden to assess how well everything was doing and to observe any changes. Used the four action learning questions as a framework for recording.

1. Nearly everything planted had taken and was showing signs of sprouting and budding.  Nigella seeds germinated, Honeysuckle etc growing (most of the cuttings were still pretty small but they have space to grow).  Chives growing around the small Robinia.  Naturally ocurring plants such as Lesser Celandine and bluebells abundant as ground cover.  (Lesser Celandine likes damp woodlandy sites so will keep an eye on that).

2. Lots of Green Alkanet to weed out!
Lawn behind clump of roses etc a bit patchy, maybe a fox or cat had scratched it bare.  (There was a lot of poo on it).
Cutting from friend with sentimental value didn't look as if it had taken, as planted a long time after it was given to her so gave it some grochar and will hope it survives.
It has been a long time since last visit, due to fragility of J's health.  I have been unable to find an easy light weight watering system.

4.  J liaise with friend for lift to garden centre to buy plants and seeds (she has a list of suggestions as above).
Arrange a date to plant and tidy in April 2014.

Pictures showing how garden is in May before tidying and planting. 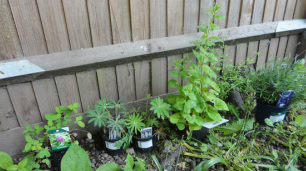 (Again there was no implementation April due to combination of health reasons and colder than average weather).

Planting - J had bought some plants, some that I suggested and others that she liked and thought would be good for wildlife.  She bought Lavender, Solidago, Verbena bonariensis, lupins x 2 and packets of bird friendly seeds, plus birds foot trefoil seeds, foxglove seeds and poache egg plant seeds.  some of the plants are sunloving so I cut a bit of Robinia down in the centre of the garden to shed more light.  However need long handled loppers to get at high branches.  can bring pruning saw next time and cut it down as other trees will remain.

I also sowed Evening primrose that I had saved from another clients garden (Fairshares Ethic) and planted some surpluses from my window sill - gooseberry and mallow, creeping jenny for edge.  Pigeons were hanging round pecking so I had to cover the seeds with lawn cuttings and hope they'd forget about them.  (see photo) Altogether the plants and seeds cost £40.

Weeding - lots of weeds in lawn, stony strip in South and in planting area, mainly Green Alkanet, goose grass and dandelion., see above pics. Weeds are going in the compost and log area under Holly tree.

Watering - very minimally as took 5 or 6 trips with large watering can to water in new plants, neigjbour's hose does not reach and may be hard extend due to spray attachment on end.  Inserted upturned bottle for wise watering near the roots of crab apple and planted an empty flower pot near lupin for similar.  J has been carrying bottles down with a friend but ideally there would be a supply nearer and easier to access.  (How about a water butt filled with run off from shed roof?)

The lawn - neighbour's son had done 2 weeks ago but is not able to do frequently so looks a bit overgrown. (See above photos)  Saw some prunella growing in it so this might improve its look.

A bench - this was discussed as J would like wrought iron bench for corner  but at the moment too expensive.
She'd also like some gothic stonework to go in somewhere when she's found something.

Observe and interact
- honeysuckle survived so I tied it up and dangled string from a hook in wooden fence for it to climb.  Could do with some one more (as per design) at other end.
- pigeons pecking away at new sown seed, so used lawn cuttings as mulch, may also keep moisture in
- J has bought mainly sun-loving plants so next time will cut down dying Robinia in centre of lawn to create more sun 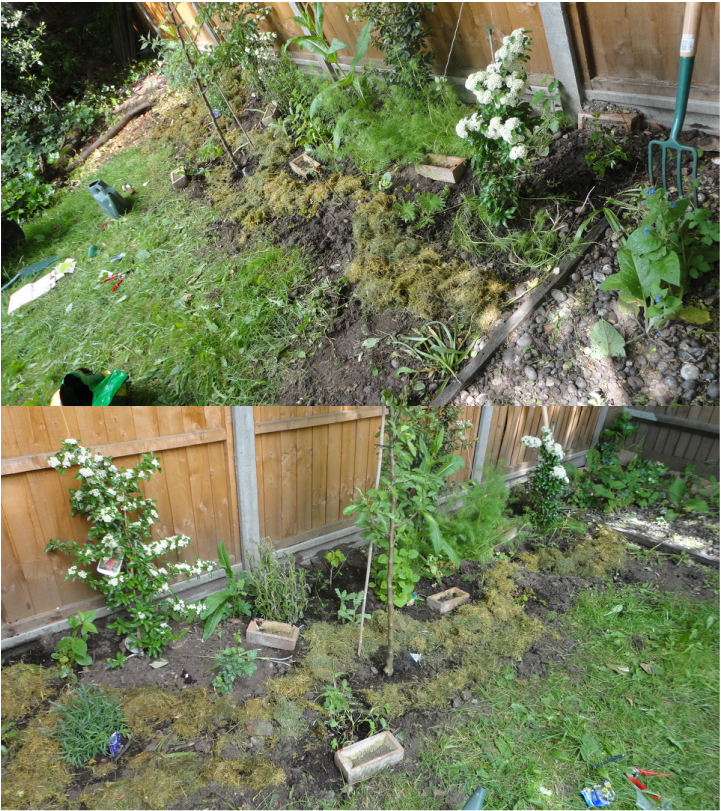 Another long break since last visit, due to illness and my being away, design nearing completion  however!

This visit, I planned to spend some time observing what was happening now in J's garden, weeding out prolific alkanet, thin any light -obstructing plants, (see photos above) feeding soil with fertiliser and planting what I had growing on windowsill (sweet peas, poached egg plant and lovage). (all of which I did).
We agreed today future sessions would be on a gift basis as J has some additional expenses due to a change in circumstances for J at home.  This means travel costs and other expenses (not sure what they would be!) will be paid plus whatever J thinks is suitable giving her income and how mcuh she likes the way garden looks. 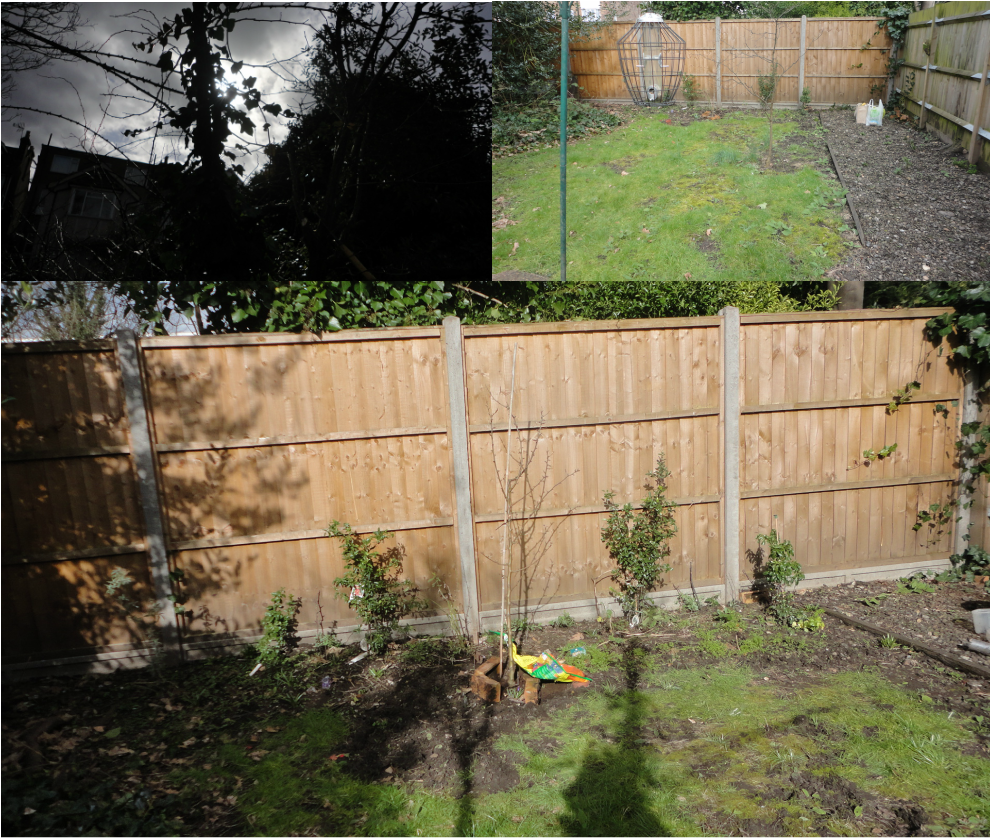 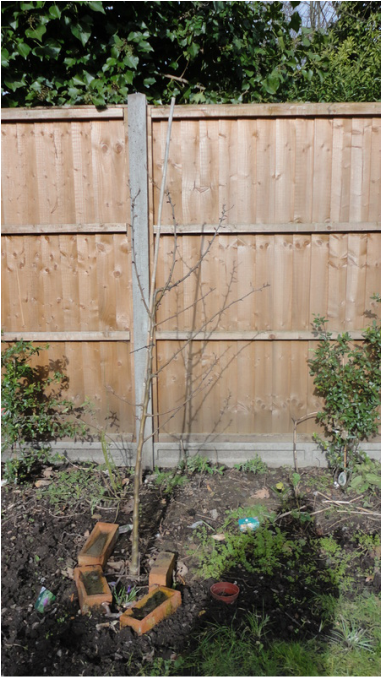 2 blackbirds and a robin visited - perhaps they feel safe there

Only weeds were in the lawn mainly - green alkanet

J can see the garden quite well still from her window. 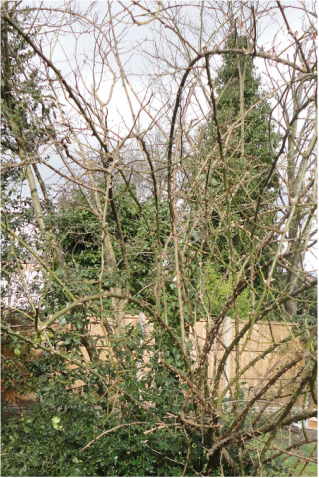 Island of trees to the South of J's garden casting shade on growing area.
Could be better?

Patches appeard in lawn especially after I'd weeded the alknanet out

Sunny spot in NE corner where stoney path is and fence going to waste.

Something for understorey of little false acacia tree in lawn

Stop fox digging round base of crab apple exposing some roots. 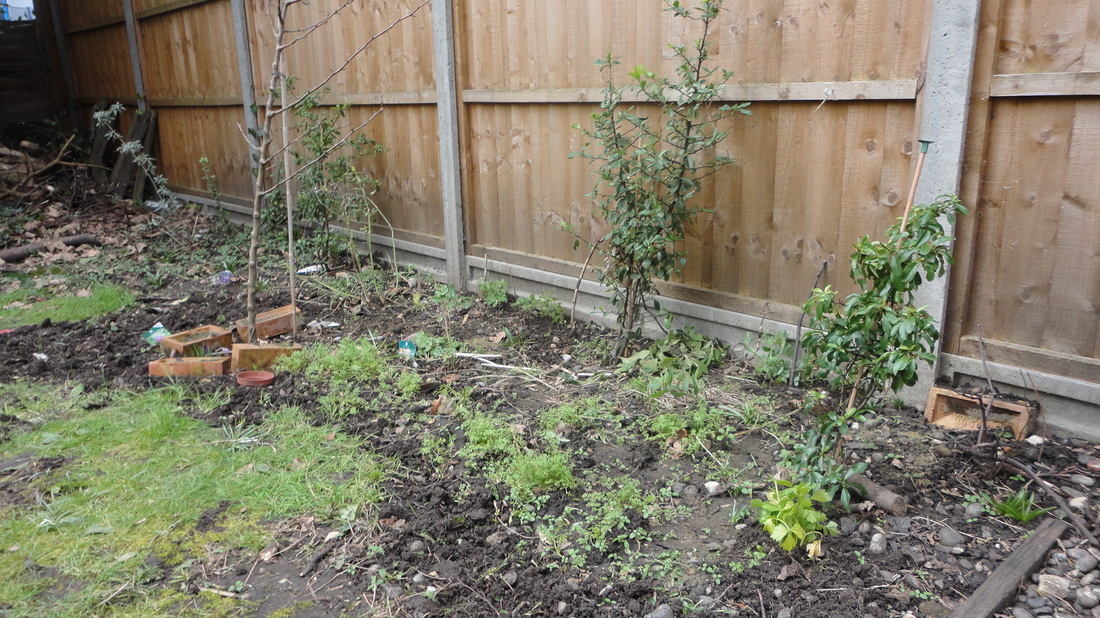